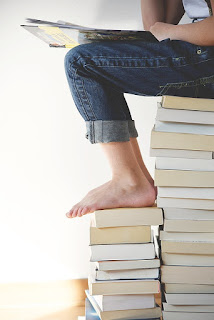 Who the child is

The reader is aged roughly 9-11 and often in the last two years of junior school. They are no longer dependent on the reading scheme and want to choose books that look like the ones adults and older children read.  They are firmly in Piaget's concrete operational stage; they can measure and calculate. However, they are not yet into abstract thought. They recognise make-believe for what it is. They understand and expect the normal patterns of story.

They will usually have a thick spin and on average contain 45,000 – 60,000 words though there are many exceptions outside of this range. The text is usually blocked. The font is usually seriffed, with difficult 'a's and 'g's. There are few pictures though some may have decorative icons at the beginnings of chapters. Occasionally the font and the line-spacing may be a little larger than in books for adults and older children. The books certainly look like "proper" books for these readers.

As these children know what to expect from a story you need to make sure your story has a firm structure.
For all sorts of ideas on story shape, see my blog post Story Theory. You may find Christophe Booker's ideas particularly helpful here. Booker identifies seven story shapes:

Initial wretchedness at home (call)
Out in the world – initial success
Central crisis
Independence and the final ordeal
Final union, completion and fulfilment

Macbeth (and other tragedies)

Father
Mother
Rivals
Other self

Also for the first time we are likely to have a story with several sub-plots. The relationship between the main plot and the sub-plot is important.
Andrew Melrose argues that if you pile the plots up on top of each other in the order of which takes up most of the story, largest on the bottom, smallest on the top you get a pyramid if you keep a balanced ratio between them.
I further develop that argument and say that: The smallest subplot contains the crisis, climax, resolution and an ‘aha’ moment. Each sub-plot is actually part of the main plot and the next sub-plot.
We can see this in Palacio's Wonder:
Main plot: August gains acceptance
Sub-plot 1 – circle of friends
Sub-plot 2 – friendship with Jack
Sub-plot 3 – attitude of family
Sub-plot 4 – Amanda
Sub-plot 5 – hearing-aids

Now have a go at planning a story. You will find now that you will devote several chapters to each of :
Inciting incident:
Growing complexities:
Crisis point:
Climax:
Also similar arcs will be making their way through the sub-plots.
How will you set your plan out?
Suggestions:
·         Mindmap
·         Spreadsheet
·         Filing cards
·         Writing software such as Scrivener.
If you really are a "panster" and can't be bothered with tis amount of detailed planning, try analysing a book for an early fluent reader instead.