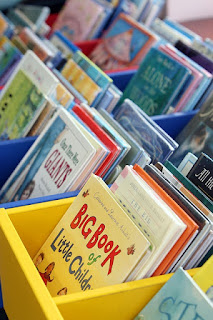 Who the child is:

The reader is aged roughly 7-9 and is often in the first two classes of junior school. They read with some confidence and want to choose their own books but may be daunted by a full length novel. Often teachers will keep a selection of suitable books in the classroom. The child still feels as if s/he is choosing.

The covers will have stylised pictures though some may be more three dimensional.  The colours will be bold. The pictures will include cartoon characters but may be busier than in emergent reader texts. There will also now be more experiments with fonts and layout of text. There may be some branding e.g. as with Diary of a Wimpy Kid. The blurb will be more complex.
However, the books will look more like "real" books to the new reader. They will have a fatter spine, be up to 30,000 words and 150 pages long. There will be more information on the cover than there was for younger readers. There will be fewer pictures and these will amuse and illustrate rather than adding more to the story.  Some elements of the emergent reader book remain. In most texts some are present. There may be a similar number of pictures. The pictures may be stylised. The text may be formatted ragged right. The font may large and the text may be double-spaced. Multiple text formats are still used to break up the texts.  Chapters and sections tend to be short. The texts, though, rarely contain all of these elements.
Sometimes an individual text will contain mixed elements, for example:
•         Blocked text and stylised pictures
•         Ragged right but three dimensional pictures
•         Short chapters and denser text
•         Blocked text but high number of illustrations
•         Huge amount of text and many illustrations.

What to think about when producing a text for this early fluent reader:

Think about the characters – maybe keep the main ones to four: the hero (Cinderella), friend (Buttons), enemy (stepsisters and stepmother) and mentor (fairy godmother).  What are the tensions between them?
Then outline a simple plot:
Inciting incident: Cinders is sweeping the floor
Growing complexities:
·         Receives invitation to the ball but sisters / stepmother destroy her invitation
·          Fairy godmother gets her to the ball
·         She meets the prince and they fall in love
Crisis point: she leaves almost too late and loses her shoe
Climax: Will the shoe ever find the right foot? Point of no return for both Cinders and the prince.
For more ideas on plot, see my blog post Story Theory   Later on in this series I'll be issuing exercises on various aspects of this.
Each of the above plot points should have a chapter of its own in this type of text and each should end on a cliff-hanger.
Now, plot out your story so that it has a similar shape. Choose one plot point and write it up as a chapter. Decide which elements, if any, of the emergent reader text you would include.

Some books to study: