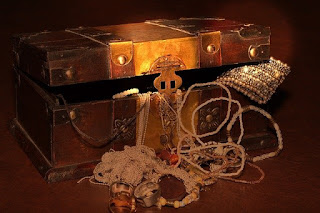 •      Look around the room you're in and let your eyes rest on five objects.  For instance I see a yellow pen, a little blue dog, a computer “spider”, a hand bell that’s a lady in a crinoline dress, a china shepherds’ hut.

•      You can find your five objects by making a frame with your fingers.

•      Now, choose the two objects that appeal to you the most. They are going to be the basis of your story. I’ll choose the lady and the shepherd's hut.

•      Who are these people who own these objects?

John was so angry. Esmerelda daren't even look back. She would have to sleep in the shepherd’s hut tonight.

Her feet got soaked as she walked over to it and she couldn’t get the door open. Then she had trouble getting her huge skirts through the entrance.

“Take me to my aunt’s house at Holmes Chapel,” she said “and please arrange for the shepherd's hut to be brought along as well.” It was the only thing she owned.

At last though she was in and she could relax a little. She couldn’t sleep though. What to do? She mulled it over for most of the night. Then she decided.  She could take no more of his cruelty.

“So, where do you want to go, Milady,” asked Charles the next day.

You can write a few more of these using the frame to identify objects for your story.

You may like to develop these into longer works. The story outline offered here works for novels and for pieces of flash fiction under 50 words long and all lengths of story in between.

Sorprendo loved his vintage Citroen 2CV even though it regularly broke down. Usually, that wasn’t a problem but today, his magic wand was stuck in the boot. He swore loudly. He was due at the Conjurers’ Convention in an hour and here he was stuck in the middle of nowhere. And worse, the battery in his mobile was flat. And then it began to rain. Sorprendo got back in the car and viciously slammed the door. The door handle came off in his hand and the back of the rear seats collapsed, falling forward and dropping into the rear passenger footwell. His shoulders sagged and he resigned himself. There was no way he’d make it to the convention now. He turned to see if he could somehow fashion a bed for the night when he realised he could see right into the boot. And there he spied his magic wand…

Image by Pezibear from Pixabay