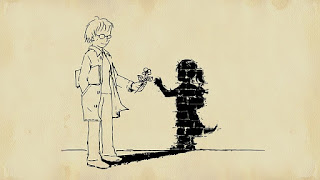 In July 2020 during the Covid-19 lockdown I ran an online creative writing workshop.  This invited attendees to engage with what they had at home and what they could find on the museum’s web site. In these posts I shall go over the exercises and showcase the attendees’ writing.

Now think of a character you like who is either the baddy or a lesser-known person e.g.

–     Someone watching Noah build his ark

–     The little bear who has his chair broken by Goldilocks

–     One of Cinderella’s ugly sisters

–     The friend who helps the prince to find Cinderella

•      Write the story in as few words as possible. You might refer to what has happened before. Include the end.

Cut back and cut back until you have exactly 50. Be careful not to lose your meaning, though

How to Write a Dramatic Monologue

•      Get inside the head of the character who is talking.

•      You might say something about what s/he thinks of the other characters in the story.

•      You might say something about what s/he thinks about what’s happened.

Here are some examples:

“I have to go,” she said pushing him away.

She ran down the stairs.

Who was she? Why the hurry? The ball would not end until two.

Then he saw the gleaming shoe. Something of her. He smiled to himself. He would find her.

“All the better to eat you with.”

The girl recognised the wolf.  The red cape might stop the blood showing.

The wolf’s sharp teeth would rip into her soon.

“No you don’t,” shouted a voice. The woodcutter with his strong axe stood in the doorway.

The fairy had been right. Those brambles were like trees.

Now, all these people here, fast asleep. A hundred years! All because of some girl pricking her finger on a needle.

Then he saw her. The kiss was the easy part.

She looked even more beautiful when she was awake.

Develop a few dramatic monologues.  This is a really interesting way of exploring a character from literature , the theatre, film and TV and even from real life.

Make up some more of the mini-monologues. Could you develop them into a puzzle for younger members of your family to solve?

THE APPLE PICKER
Don’t ask why the boss wanted me picking apples when most weren’t ready.  She wanted the best apple with an unforgettable taste for a  special friend. She selected the biggest, shiniest green apple I’d found and smiled. I know she’s going to do something with that apple.

“She will be here in a minute now that I have achieved my goal. It was easy because she is so simple, it was easy to get her to wear that dress. And to think that she thought she could replace Rebecca. There can only ever be one Mrs. de Vere.”  52 words

"You have to admire my next-door neighbour. He’s a master craftsman. You should see his decking. But now he’s made an ark. To be honest it’s much too large for his garden and I can’t see the purpose. Well, if you’ll excuse me, I’ll be off. It’s beginning to rain."

"I’m sorry. I’m retired. I don’t know where you got those instructions but they’re out of date. You can’t go around rubbing lamps and then expecting me to do your bidding. What’s that you say? One hundred ducats? Well, I suppose I could come out of retirement just this once…

"Just look at his beautiful, blue eyes! That tiny face is so determined. You know, our son is going to be an important man – someone of note. Don’t laugh! It’s true. And such a fine name we’ve chosen, my Liebling. Adolf Hitler. It has such a distinguished ring to it.”

Image by 愚木混株 Cdd20 from Pixabay

Email ThisBlogThis!Share to TwitterShare to FacebookShare to Pinterest
Labels: Bury Art Museum, telling the other side of the story