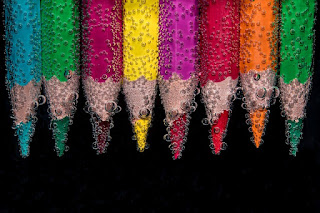 This can be used at any level. Learners should always be encouraged to make as much use as possible of what they already know.
First step: think of words associated with something learnt recently. For beginners this might be colours, days of the week, classroom objects.
See examples below in French, German and Spanish:
vert, jaune, gris, blanc, bleu, rouge, noir, violet, rose, marron, orange

We often think of haiku as three line poems with five syllables in the first line, seven in the second and five in the third with a change of tone between the second and third line. The best haiku often don't do exactly that but students often get great pleasure in following these "rules" precisely.
We might then find something like this:

You can use these for extending vocabulary. For example, take a colour and allow the students to look up words in a dictionary that go with that colour.  So we might get:

You can also use this to combine subjects. Students often think in boxes so it's good to get them to make the most of what they know from all of the different subjects they've met. Here we combine days of the week and school subjects:

Slightly more advanced students might use in the last line a sentence they can construct either because of what they have learnt in this unit or another one.

These can also be tackled as group work and the outcomes lend themselves to colourful displays that can further enhance learning.

Email ThisBlogThis!Share to TwitterShare to FacebookShare to Pinterest
Labels: creative writing in other languages, haiku