This was a fantastic opportunity to showcase some of our students’ work and also to inform visitors about what we do in writing fiction. The Createfestival takes place annually at the University of Salford.

Our most popular feature was undoubtedly our Canned Fiction. Here visitors could select a can which had a tempting blurb on it e.g. “The Tone - a sad story told mainly through voice mail. Warning: contains strong language” or  “Battenburg – a story of cake and old age”. The reader takes their can away, pulls the ring, and enjoys the story at their leisure. The stories were printed in limited edition – a maximum of six each. If you pick a canned story, you read it in in an entirely different way. The story seems to be just written for you. The idea came from the Ministry of Stories/ Monster Supply Store where canned fiction by such well-known people as Terry Pratchett and Michael Morpurgo is on sale. Stories were chosen largely form students who had completed good projects in Final Portfolio (third year) and Working the Text (first year).

Throughout the day flash fiction and excerpts from critical essays were shown on the screens at our building at MediaCity UK. I was particularly pleased that these were formatted as light print on a dark background. That is so much easier to read.

Some of the flash fiction came from completed assignments – again from first and third years. Some were written especially for the occasion.

You can see the examples here. Some of these come from the flash fiction challenge described below. 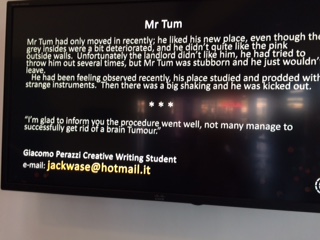 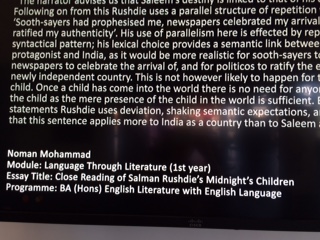 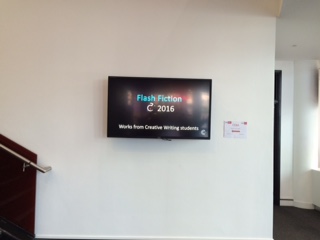 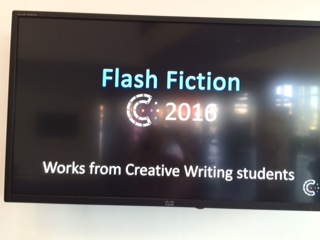 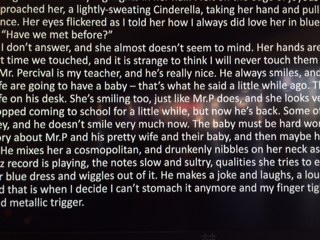 Members of the public were invited to write some flash fiction. We offered a prompt sheet that included ideas about using postcards, Twitter pictures and many other ideas. See the prompt sheet here. Note, you will have to source your own post cards for this.
Some people worked at the table. Others took it away and emailed us the work. 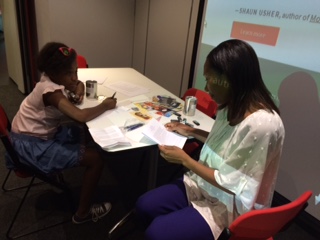 Our second years have an optional module, Writing Novels for Young People, where they write a 500 synopsis for the novel on which they want to work.  The best six were selected and the general public were invited to vote for which one they liked best. I’m pleased to confirm that all of them received some votes and that there were two clear winners, who will now receive mentoring from The Red Telephone. We hope that they will finish their novels. There is a strong likelihood that if they do they will also receive a publishing contract. They can, however, use the mentoring for other aspects of their work if they wish.

The general public and students alike were invited to bring an oral pitch to the room. We were exposed to some more fascinating stories. Again, we had a clear winner who will also receive mentoring from The Red Telephone.
Posted by Gill James at 05:54