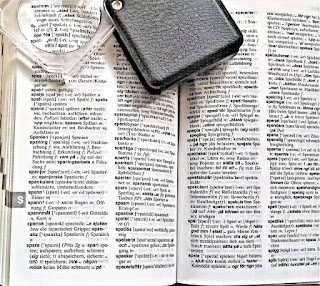 If you speak another language quite fluently, perhaps if you've lived in another country for a while, if you're European level B2 or above or maybe you have A-level or an IB that contains a strong element, try this:

Write in your chosen language for twenty minutes. Give yourself a topic but if you can’t think of one, write about where you are, or about a happy memory or retell a favourite story. Do not look up words you do not know. If you can’t find the right word, skirt round it, being ungrammatical if you have to.

You may also use words from another language you know.

Then, translate what you have written into English. You will notice that you have written much more simply and probably also more effectively than if you had gone straight into English. Less is more. If you used a language in which you are fluent, you may have imported some interesting idioms, euphemisms or phrases that are clichés in the foreign language but are pleasingly fresh in your own.

A bilingual dictionary in your chosen language.

Spend ten minutes doing this every so often – once a week, once in a blue moon, once a month.
Choose a letter of the alphabet. Read through the dictionary looking for idiomatic and eccentric words. Collect some words and try to get them into your writing.

German is a particularly good language for this. For instance, a helicopter is a “hopping screwdiver”, a nurse is an “ill-person’s sister”, an ambulance is “rescue car” and a mole is a “gob throw”.  French has some beauties as well: rat poison is “death to the rats”, bungee jumping is “jump on elastic”, a bat is “bald mouse” and the word for dustbin sounds like “smells beautiful (female)”.

Use these new expressions in your writing.

Here is a piece of such writing I’ve used in a novel. I was in Holland when I wrote it. Dutch has similar “building-block” words to German.

‘May I call eye-baller Thomant, who says the blamed watched Old Mother Gossipen struggle up the penty-slope from the provisions centre. He did indeed carry her holdy-all, but only as far as their path followed the same direction aim. He should have gone the extra mile to her living-in.’ (The Prophecy 229)

Collect these words whilst in a country where people speak your chosen language.
Collect them also, as you work on other exercises. Once you’re aware of them, you’ll keep on seeing them.

As collecting the words and phrases becomes a habit, you might consider also looking for proverbs and sayings from other languages. They are clichés in their own language but can sound fresh in another one.

For example, when everybody suddenly stops talking, the French say “It’s an angel passing over”. In German, interfering people may be accused of putting their mustard on somebody else’s sausage and rather than treading on people’s toes, they tread on others’ ties. A clever pun exists in Spanish because “to be superior” to someone is to “lie on top of them” and many a Spanish husband is very proud of being superior to his wife. But let’s hope they didn’t also eat the soup before mid-day because that leads to pregnancy before marriage. The Greeks rather charmingly tell us that one swallow does not mean that spring has arrived.

Email ThisBlogThis!Share to TwitterShare to FacebookShare to Pinterest
Labels: cliche, creative writing in other language, foreign language one